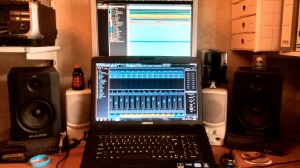 July was a trying month, one way and another, featuring more than its fair share of computer problems.  After my Vista PC finally stopped trying, I quickly tired of plugging all the bits of kit into my Windows 7 laptop that used to be permanently hanging from the Vista tower, so I bought myself a docking station.  Theoretically, this had a triple benefit – only one USB cable needed to plug everything in, I’d have more USB ports so I could set up my external hard drives permanently and I could use the now-redundant monitor as an extension to the desktop.  Where was the downside?

The words “plug and play” now evoke something of a hollow laugh. I installed the supplied software, plugged in the machine and, being a geek, clicked on the balloon in the system tray to watch the progress as it installed the several device drivers necessary for the separate display, audio, Ethernet & USB hub functions.  Which it didn’t, falling over when installing the display drivers.  Uninstalling and reinstalling the software didn’t help, the only change being that the Ethernet driver also wouldn’t install second time around. Several messages to the manufacturer’s support team didn’t get me very far forward, but in the middle of trying to sort it out, something went seriously wrong and my laptop decided to start to take forever to boot up, sometimes refusing to display the Windows 7 user logon icon at all.  Ah, thought I, system restore will undo the damage, so I set it to restore the most recent known good restore point, only for system restore to fail and, in the process, wipe all my restore points.

Panic was now beginning to creep in.  I downloaded the then-latest DisplayLink driver and installed that, which threw up a message saying that the installed version of the Intel USB 3.0 eXtensible Host Controller was incompatible, so I downloaded and installed an updated version.  This seemed to fix the problem both of the docking station not installing and the slow boot, (by this stage, I’d edited the Registry to put the logon/logoff messages into Verbose Mode, so I had a better idea of what was hanging – who knew Windows had a verbose mode? – but that wasn’t much help), but it left me with another problem.  At random intervals, (almost always when the laptop had been left on but idle, but sometimes whilst I was in the middle of using it), the laptop would freeze, with the hard disk going into overdrive.  All was not well.  And it wouldn’t shut down unless I crashed it by leaning on the power button.  Having checked for viruses and malware, I uninstalled the DisplayLink software, (again), and redownloaded and reinstalled the eXtensible Host Controller, plus an updated version of the DisplayLink driver.  For the first time, the Displaylink software installed at the first time of asking and it all worked!  The laptop now boots up and shuts down and, (after a week of usage), hasn’t frozen since.

You can bet your bottom dollar that I created a known good system restore point!

So, having put all my eggs into the basket of one, (now working) PC, I also downloaded and set up the backup software for my Seagate NAS Drive, (did you know that Windows 7 Home version won’t backup to a network drive?) and backed up my working directories.  And, whilst I was in an updating mood, I thought I’d update some of my VST plugins, namely those from Slate Digital, Plug & Mix and Eventide.  The P&M package updated faultlessly, (as did the other two, to be fair), but when updating software, it’s always good to have your ducks in a row, in this case having the software licenses keys etc. to hand just in case they’re needed.  Only thing was, I couldn’t remember how the Eventide Channel Strip was authorised, so I checked the iLok License Manager, as I had a feeling that it was iLok’ed.  Up popped a message saying that there was a new version of License Manager, so I clicked on OK to install the update.

It proved an update too far, as the updated License Manager wouldn’t run, saying that it couldn’t find the server, and Cubase couldn’t run the iLok’ed plugins.  But the message from Cubase was more helpful, pointing the finger at a service not running.  A quick check in Windows Task Manager revealed that the PACE License Service was Stopped, even though it was set to Automatic.  I could manually start it and everything worked, but it wouldn’t start on reboot.  I had to set it to Automatic (Delayed Start) in order to get it to start without requiring intervention all the time.

You will appreciate that getting all of this sorted consumed most of my free time this last month, so no music got made, no videos were recorded and no blogs updated.  But it all seems to be working now, (touch wood), and I have the nice working setup shown in the photo at the top.  It’s August, let’s make some music!