The earliest sample-based instruments tended to have one sample for each note, leading to a “machine gun” effect with rapid retriggering. The drum part for New Order’s Blue Monday is a classic example of this, although, (ironically), it was meant to be an echo style effect, but the Linn Drum they were using kept crashing and they forgot to reprogram the dynamics at the crucial moment. With the growth of multi-sample instruments, samples are played on a “round robin” basis, each successive note triggering a different sample, so that there is variation in the sound, in an effort to generate a more human performance.

But musicians don’t only play with slight differences in intonation and attack, they also bring an arsenal of playing styles and techniques to bear. We can emulate vibrato with the pitch bend wheel, tremolo with the modulation wheel, but it’s not always straightforward. The current generation of sample based VSTi’s such as Kontakt have a solution – using keys outside the normal range of the instrument to switch to a wholly different set of samples, for example going from legato string playing to pizzicato. In this video, I look at the articulations available in Broomstick Bass and how to write those key switches into an existing MIDI part. 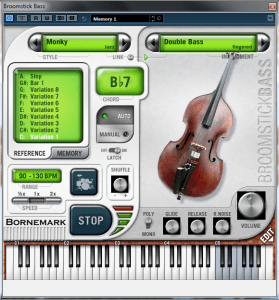 With the end of the holidays fast approaching, I was able to take some time to get some actual recording done.  Serial bass line recording was where I started.  I’ve got drum parts down for most of the tracks using the EZ Drummer libraries, but my efforts to generate acceptable basslines from Broomstick Bass’ internal library were (almost) going nowhere, so I abandoned that as an idea and reverted to playing them in off a keyboard.  In the space of a couple of hours, I had bass parts for 4 songs recorded and ready for editing and a second session yielded seven more – sometimes, you just have to go with what you know.  I’ve uploaded videos showing how I’ve gone about editing them to the YouTube channel.  Why almost?  Well, as you might expect, there was the exception that proved the rule – the bass line for “A Winter’s Blues” is, as it stands, what was generated by Broomstick Bass from the Chord Track. END_OF_DOCUMENT_TOKEN_TO_BE_REPLACED 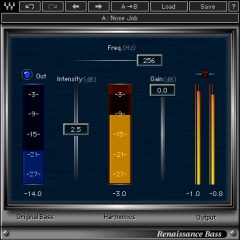 So Christmas is a time for relaxing, taking time out and doing the fun things in life, right?  What world are you living in…..  I had no sooner posted the December update than progress came to an almost complete standstill, as preparations for the festivities took over and I was presented with enough vegetables to feed a small country for a year that needed to be peeled and sliced by Christmas Eve.  Add in the welcome opportunity to spend some quality time with a family I don’t see enough of and there aren’t enough hours in the day.  However, in the lull between New Year and actually going back to work, I did manage to squeeze some time in for music.  Oddly, the most satisfying thing was the least productive – I took advantage of being home for a few days to clear out the flotsam and jetsam that tends to accrue in my study whilst I’m away.  I now no longer have to step over random boxes to get to my chair and when I sit down, I sit down at a clear desk.  Luxury! END_OF_DOCUMENT_TOKEN_TO_BE_REPLACED

It’s one thing to tighten up the timing of a recorded part, be it MIDI or audio, but there’s no guarantee that it will be in time with the other parts in the song you’re recording.  What happens when your bassist doesn’t sync with your drums, be they virtual or real, (or both)?  Fortunately, Cubase has an easy system for copying the quantise from one part to another, so that you can copy the groove of one part onto any or all of the other parts playing at the same time.  In this video, I give you an example of aligning the groove of a bass part with some pretty busy drums and look at some of the issues that can arise when you do so.

For those of us whose keyboard skills are not as complete as Rick Wakeman’s, recording MIDI from a keyboard can be a humbling experience when you open the resulting part for editing.  What felt like a good performance can often be revealed to be a shambolic approximation of the desired recording, (or is that just me?).  All too often, the temptation is to quantise the notes to within an inch of their life, leaving the part in time, but robbed of that human ebb and flow that separates man-made music from machine music.  However, Cubase offers a halfway house between a performance that’s just go too much swing and sterile perfection – iterative quantising.  This takes your ragged timing and smooths out the edges, leaving something close to the beat, but not welded to it.

Another issue with recording MIDI bass lines is that a bass guitar is (mostly) a monophonic instrument, but keyboard recording can leave you sounding adjacent notes that you could never play on a bass.  This registers with the listener and detracts from the overall effect you’re trying to achieve.  Cubase offers the facility to eliminate overlaps between notes, ensuring that your bassline is a one note wonder and doesn’t sound like you stumbled your way through.  The video below looks at the application of both Iterative Quantise and Delete Overlaps to editing a less-than-perfect MIDI bass part.

One of the first uses I had for the Logical Editor was to try to put some dynamics into drum patterns I had written into Cubase.  This video looks at creating a drum part by hand that matches the dynamics of an existing drum pattern taken from a commercial drum library, using the Logical Editor to apply a limited range of random velocities to replace constant values.

The Logical Editor in Cubase is one of the more baffling features and yet is also one of the most powerful.  Stemming from Cubase’s origins as a MIDI sequencer for the Atari ST, it allows you to define rules that apply across multiple selected MIDI parts all at once.  Or, put another way, with a little thought you can set up rules that perform actions with single click that would otherwise take you hours of effort to achieve.  This video introduces us to the cryptic world of the Logical Editor.